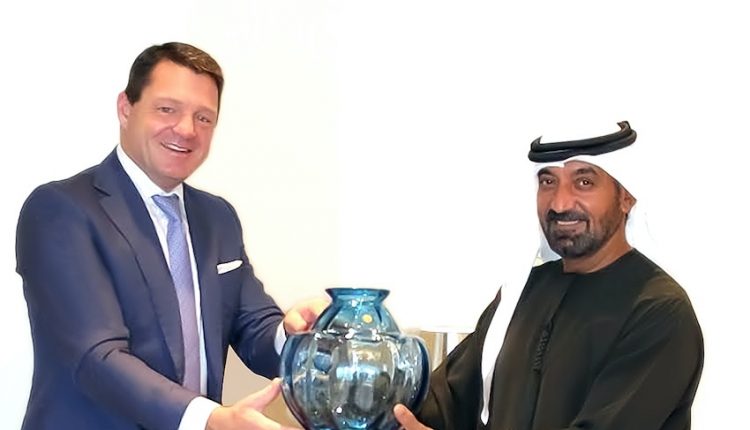 Mr. Pieter Elbers, President and Chief Executive Officer (CEO) of KLM Royal Dutch Airlines (KLM) visited Dubai Expo on 23rd of January and co-hosted a reception at the Netherlands’ pavilion, attended by senior leaders from within the local Netherlands’ diplomatic and business community and the members of Dutch Sustainability group (DSG) and VIP guests.

Mr. Elbers also visited the regional headquarters of Air France KLM at Dubai Airport Free Zone (DAFZA), spent time with his team based in Dubai and signed the first NDC contract in the Middle East region with SATGURU group.*

In appreciation of KLM’s 50 years of operation to Dubai and the continuous local support received throughout these years, Pieter Elbers also had the honour of meeting, His Highness Sheikh Ahmed Bin Saeed Al Maktoum, President of Dubai Civil Aviation Authority and Chairman of Dubai Airports and some very high level decision makers in the airline industry and Dutch diplomats.

Welcoming guests to the reception at the Netherlands pavilion at Expo 2020 Dubai, Mr. Pieter Elbers, KLM President & CEO, said: “The year 2022 marks the 50th anniversary of KLM’s first passenger service to Dubai. An impressive milestone. All the more reason to visit Dubai as the UAE continues to celebrate its ‘Year of the 50th’ and hosts the Expo 2020 Dubai. There is a strong and growing relationship between the UAE and the Netherlands, supported by KLM and reflected in the Netherlands pavilion. Dubai and the UAE are global hubs for international business, aviation and hospitality and I have been deeply impressed by the scale and quality of the Expo. The event is a very ambitious showcase for innovation and sustainability and this is a global mission that KLM fully shares and supports, including here in the Middle East.”

KLM started operating services to Dubai on April 5, 1972 with a once-a-week connection via Athens and Dhahran, operating an extended Douglas DC-8 jet aircraft.

The KLM Corporate Sustainable Aviation Fuel (SAF) Programme was launched in 2012 and now includes 16 partners, including ABN AMRO, Royal Schiphol Group and Arcadis. Through the programme, KLM ensures that the fuel it buys is manufactured sustainably, using raw materials that do not cause deforestation, impede food production or harm the environment in any other way. KLM is also part of the Clean Skies for Tomorrow (CST) coalition, which was established within the World Economic Forum to ensure the availability of sufficient SAF to be able to fly CO2-neutral by the middle of this century. In addition to KLM, the coalition consists of other leading players in the airline industry such as Airbus Group, the Boeing Company, Schiphol, Neste, Shell, SkyNRG and Heathrow Airport.

Recently, KLM has announced that it will start adding 0.5% Sustainable Aviation Fuel for flights departing from Amsterdam. In addition, KLM will offer customers the option of purchasing an extra amount of SAF. In this manner, KLM aims to stimulate the market for SAF. The face of travel is set to change in the future and SAF will play an essential role in this regard. In addition to fleet renewal and further innovation within the company and sector, KLM is committed to bringing about an energy transition.